Download FNF VS Jeffy 2.0 – New MOD for Friday Night Funkin’ that includes as a character the protagonist of the animated series SuperMarioLogan, also we will find not only one version of Jeffy, but three. This is a MOD with a humorous theme whose set is quite good. To learn more about the features included just keep reading. 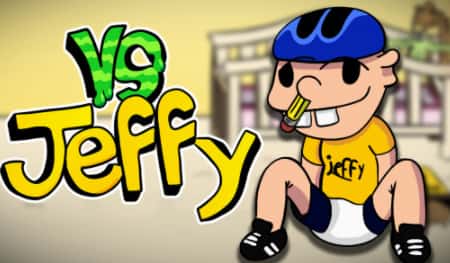 VS Jeffy 2.0 offers us two new weeks that include a total of 8 songs, three songs for the first week, and five new songs for this second week of update, which include music full of joy and funny rhythms, besides offering different animations and vocals of the characters that appear, especially for the different versions of Jeffy.

Graphically, FNF VS Jeffy 2.0 offers new customized backgrounds in which we see elements that allude to the series in which this character is the main character. We will also have animated scenes in which other characters from the series appear. In each song a new version of Jeffy appears, from when he is a baby until he grows up and ends up pointing a knife at his father. While in the first week we already had pretty cool versions of Jeffy, this new update has gone one better, even adding new playable characters. This is a MOD that stands out especially for its character, which is quite funny, and for offering a lot of content.