Friday Night Funkin’ for PS1/PSX is a playable version of the famous FNF game for the PlayStation 1 console, also known as PlayStation X. In recent years retro or old generation consoles have become fashionable, thanks to the fact that their games over the years have had better and better ratings. That is why many of the latest generation games have been adapted to these old consoles, or vice versa, ie we seek to play games from years ago on current consoles or computers, through Emulators or other solutions. 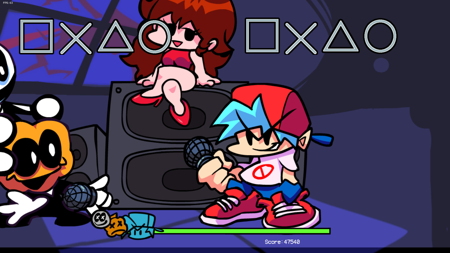 To enjoy this game on the PS1 or PSX will have to have at least one of those consoles, a screen where we can connect the console, and of course the file that we leave below to download containing the Port for PSX and PS1 of Friday Night Funkin’.

For now the available version of FNF for PS1/PSX has quite a lot of content. For starters we will have available already the 7 weeks that have been released to date of the original game. But do not think that the thing ends there, the developers are already thinking about the introduction of MODs for the PS1/PSX Port, so much so that we already have some available in this version as VS Kapi MOD and VS Tricky MOD.

When it comes to installing FNF on PS1/PSX there is no difficulty. In the case that we are using an emulator we will only have to run the downloaded file as if it were any other ROM for the PSX. In case we are using the original console, we must install the downloaded file on the memory card, hard drive or USB with which we are running the other games.

Weeks and MODs Available in FNF for PS1/PSX

Requirements to play FNF on PS1/PSX