The Friday Night Funkin’ (FNF) characters have a history worth knowing. Many of them are related to each other ( the Dearest family) while others are hired thugs, strange creatures, or just kids in Halloween costumes. Some of these characters are based on or inspired by other famous video games. The protagonists of Friday Night Funkin’ are BoyFriend and GirlFriend (known as BF and GF), both of whom will appear in all of the game’s songs.

BF will be the singer who will have to put all his rhythm and effort to participate in the musical battles, while GF will be as a spectator observing everything that happens throughout the songs. In each week of the FNF, BF will face a different character (or even several), they all have different reasons to be there and try to become the best opponent. Below, we tell you a bit more about the lore and interesting facts that the main characters of the FNF have to offer.

Next we will explain to you what are the main protagonists of the FNF game:

Boyfriend or also known as BF is the main character and protagonist of Friday Night Funkin’. He will also be our main playable character with whom we will have to face different enemies in rap battles. BF’s main objective is to become GF’s boyfriend, he is very much in love with her and will do whatever it takes to get her love.

Girlfriend or also known as GF is another of the main characters of Friday Night Funkin’, and that will accompany us in virtually every song, it is not very common to take the microphone, but we will have their moral and visual support. It is the platonic love of BF, which performs duels with each and every one of the people and characters that come between GF and him. GF is the spitting image of the beautiful, funny, and daring girl we’ve always wanted to conquer.

Depending on each week, we will usually be facing one or two FNF characters who will be the antagonists, below we will detail who they are:

Daddy Dearest is our first enemy in Friday Night Funkin’, since he is the rival of the first week of the game. The moment we meet him we can begin to sense that conquering GF is not going to be an easy task, since Daddy Dearest is his father and is completely against us becoming his boyfriend. In addition Daddy Dearest is a former Rock singer, who has a great musical ability, and who has many contacts of which he will make use to go sending us enemies whenever he can.

Skid and Pump are the enemies we will have to face in the second week of Friday Night Funkin’, also known as Spooky Month. Despite their strange appearance they are actually 2 young boys dressed up for Halloween. One of our upcoming rivals named Monster is the one who convinces these two boys to take on BF. One aspect to note is that Skid and Pump are characters from a web series and have been introduced into the lore of Friday Night Funkin’.

Pico is one of the most emblematic characters of Friday Night Funkin’ and also one of the toughest opponents we will have to face, he is our enemy in the third week of FNF. Daddy Dearest has pulled his contacts and hired him to try to get BF away from GF, since he considers that BF is not a suitable boyfriend for her. Pico, an extremely intelligent boy, has an IQ of 127 and was one of the best students in school. However, he is now dedicated to sowing Kaos using a multitude of weapons and artifacts. He is not a new character either, but comes from a video game from the late 90’s called Newgrounds. 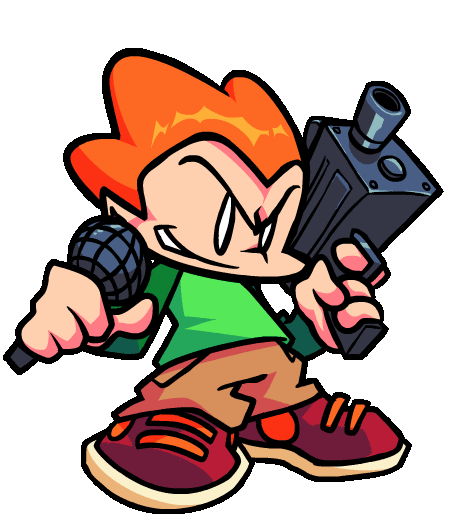 Mommy Mearest is our next opponent in Week 4 of the Friday Night Funkin’ game, plus she is GF’s mother. As if it wasn’t enough to have Daddy Dearest against us, now we also have GF’s mother against us. Just like GF’s father, his mother is also related to the world of music and in the past she was a Pop star. She is always accompanied by her personal bodyguards. One aspect to note is that in this fourth week, she will not be our only rival but we will have to face her and Daddy Dearest.

Monster is probably the opponent we know the least about of all the enemies we have to face in Friday Night Funkin’, it will be in the fifth week of the game when we will have to face him. It is a sinister being that has the power to alter the perception of reality of others, its appearance is quite curious since it has a lemon-shaped head with eyes injected with blood, and a mouth stained with blood as well. We only know that its main goal is to eat Girlfriend.

Senpai, despite his polite and sophisticated appearance will be our rival in the sixth week of Friday Night Funkin’. As we said we should not trust his appearance because he is going to be a tough opponent. In the past he was a friend of GF’s father, but after a musical dispute he was victim of Daddy Dearest and now he is locked in a dating simulation video game. He has lost part of his human essence and his great ambition is to escape from there.

.
Sometimes in Friday Night Funkin’ we will face more than one opponent per week, in week six, in addition to facing Senpai we will also face Spirit. Spirit is another human being who in the past was defeated by Daddy Dearest, from whom he now seeks revenge, since he took away his human body and left him simply in spirit form. But in order to carry out his mission he needs a body with which to become human again, and that is what he tries to achieve in front of us, he seeks to steal our body to possess us and be able to have a human appearance again.

Tankman or also known as Sargeant John Captain is the enemy we will have to face during the seventh and so far final week of Friday Night Funkin’. This is not a new character, he comes from the same video game as Pico: Newgrounds, and has now been introduced into the FNF lore. He is a very tough soldier to fight, and he is always accompanied by 2 Tankmen that will make things even more complicated. He is an opponent to take into account and against whom we should not trust if we do not want to end up losing the rap battle against him.