Friday Night Funkin’ VS Volt FNF MOD is a new modified version that allows us to access a new week in which we will face Volt, a rather peculiar character. The MOD for now is in DEMO phase, so it still does not offer us all the content that will be included in the Full Week version, which will be released later. 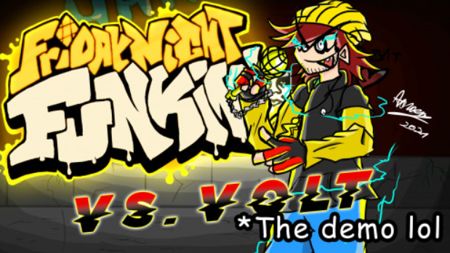 FNF V.S. Volt offers us for now 2 new songs, which differ widely in the difficulty of their charts. The first one is quite easy, while the second one already reaches a medium/high difficulty that not everyone will be able to overcome easily. As for the music, the second song is quite good, and is quite a bit more frantic than the first one.

One of the aesthetic details I liked the most are the new recolored arrows. While it is a concept that has been used a lot, it is one of the occasions that I liked the design chosen to replace the original arrows of the game. The style of Volt’s skin is quite peculiar and the truth is that it is not usual in FNF, and is one of the few flaws that can be taken out of this MOD (the background is quite simple but fulfills its function).

Latest updates for VS Volt