VS Garcello But Bad (Smoke Em’ Out Struggle) is a Friday Night Funkin’ MOD that offers a “parody” version in paint of one of the most famous MODs of the last weeks: VS Garcello. Downloading this MOD will give you access to the same content as the MOD in which it is inspired, but with some changes in some details of the MOD. 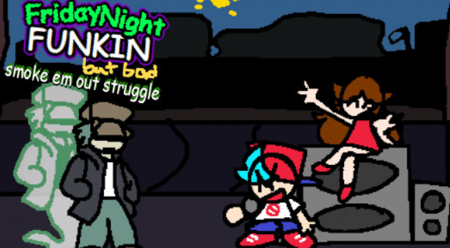 The first big difference of VS Garcello But Bad is its graphics, which literally have been drawn with paint and aims to offer the worst possible quality. We are not facing the first case of a MOD of this style, since the “but bad” ending is being used to apply the same changes to different famous MODs of the game. It all started with the mythical Friday Night Funkin’ but bad MOD, and since then several options following the same idea have already appeared.

VS Garcello But Bad also slightly changes the vowels of the characters to make them sound a little worse, and add even more if possible to the absurdity of the graphical part. Like many other “but bad” versions, it’s recommended if you want to have a few laughs, but the original MOD version is much better (obviously).

Latest updates for VS Garcello But Bad FNF MOD