Download Friday Night Funkin’ VS Alfie & Ralsei: Moonlit Melodies FNF MOD – New release for FNF that includes a new week for the MOD Alfie & Ralsei in addition to a remastering of the first existing week. It is a very complete title since it brings new features both in the musical section, as graphically, plus the first installment was already a more than acceptable MOD, so now we recommend it even more. 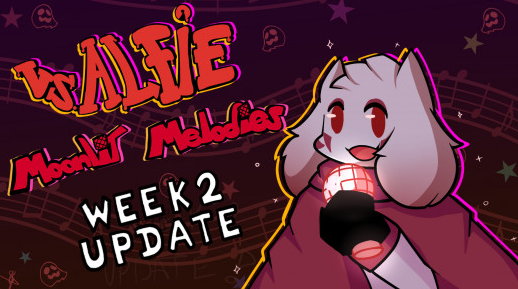 As for the music, as we said previously, the MOD brings a new week with 3 unreleased songs which will make us enjoy quite a lot since, they are quite pleasant both to listen and to play. In addition we also have a remastering of the entire first week of the MOD that was previously released, so replaying this first week is more than recommended. As if that were not enough, we will also have a tutorial and some Bonus songs in the Freeplay menu.

Visually, we have a lot of news since all the visual section of the first week has been completely renewed. We will also have other elements such as new Backgrounds, Skins for the characters, Arrows redesigned with different colors from the usual ones… However, personally the best in the graphic section are the dialogues between songs, where the animations of the characters are quite well designed, and the RPG-like dialogue format is very successful.

Undoubtedly this is a more than recommended MOD, and only with the remastering of the first week is a good incentive, but also with all the additional content we have is a big step forward VS Alfie.