Friday Night Funkin’: The Return Of Garcello is a new MOD for FNF that includes a complete rehaul of the well-known VS Garcello (SEOS) MOD, adding new quality cinematics, new remixes, and new characters (Whitty, Sarvente and Zardy, to be more specific). In each of the week’s tracks, one of the characters will join BF to take on the others. 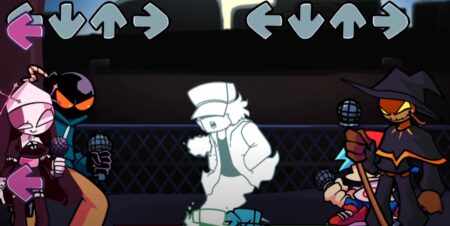 In FNF The Return Of Garcello you can enjoy a total of 4 songs (remixes of the original songs which also include the vocals of all the characters included. The most interesting song of the MOD (and the main attraction of it) is the third one, “Release”, in which Garcello will join BF to face the other three characters. This confrontation has the peculiarity of containing small fragments that take us to the original background of each of the characters. The last song of the week will allow us to sing one last time with Garcello before he disappears completely again.

The truth is that despite not being an original sequel, The Return Of Garcello FNF MOD is undoubtedly a rehaul at the height, which has enough new features and improvements to be worth playing. It could be said that it is the best rehaul that has appeared so far, at least in terms of story, cinematics and new features (and there have been a few before).

Characters included in the MOD:

New Features of FNF The Return Of Garcello MOD

Latest updates to The Return Of Garcello