VS Phil Eggtree is a MOD for Friday Night Funkin’ in which we will face the mythical Phil Eggtree, from Riddle School, in a new complete week of the game. Downloading this MOD will give you access to new unpublished stages within FNF, which cannot be found in the original game. 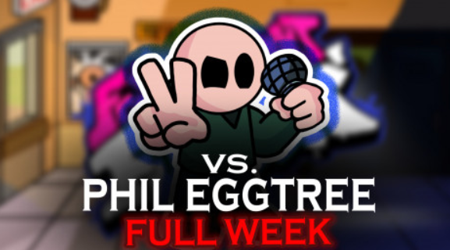 The new week included in this MOD has a total of 4 songs (the last two have been added in the latest update, which has just been released). It should be noted that the music in this MOD is very enjoyable, and the charts are not bad either (although they are not what makes the MOD stand out). The fourth confrontation will have a special background and some other surprises in the gameplay and the song. The new Phil EggTree skin and the two new backgrounds are quite well designed, perfectly fulfilling their function in the MOD.

Overall it’s a MOD that can easily be placed between tier B and tier A of the best FNF MODs (but it doesn’t reach tier S by far).