Download FNF VS Dusttale Remastered – This new MOD for Friday Night Funkin’ starts with an introductory scene where we find that “the human” has finished the genocidal route killing all the monsters. Sans, the character we will face, can not stand to see his brother and his friends die again and again, so he decides to make his own genocidal route to overcome the power of the human. To do this he will have to face all the monsters of the underworld, including his own brother. This will make him go completely crazy, increasing his desire to fight and it will then be the moment when he crosses paths with BF, thus beginning the first battle. 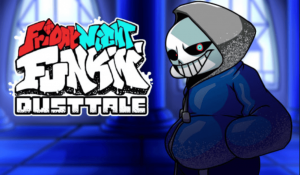 In VS Dusttale Remastered we find a total of 8 songs accompanied by dialogues and cinematics. We can highlight mainly the visual accompaniment in all songs, which is obviously very worked, besides having a high level of difficulty. In the penultimate song, in my opinion the most interesting, we discover a different appearance for Sans who in turn also perceives BF as different due to his hallucination. Again the stage gets a swinging motion that increases the difficulty and gets us right into the confrontation. To unlock the special pacifist ending we won’t have to attack Sans in the last song.

In terms of aesthetics and design, the main feature of this impressive MOD is the fully animated cutscenes. These scenes give a dramatic and interesting atmosphere to the whole MOD, which allow us to perfectly understand the madness of Sans and how he channels his rage and impotence against BF. In VS Dusttale Remastered, in addition, we will find in each song elements that are constantly changing as the background, the cinematics and postures. Fundamentally highlights the opposition of the characters to the top of the screen, appearing at the top as if the world were inverted (great metaphor for the increasingly advanced dementia of Sans).

In conclusion we can indicate that this is a MOD with an interesting lore that we can discover as we advance in the clashes, which offers a variety of songs as well as a worked design with novel elements in each song.