Download FNF VS Monika + Doki Doki Takeover – New MOD for Friday Night Funkin’ which includes a new reboot of the famous VS Monika MOD. The creators of VS Monika have been working hard to offer us a new update of this MOD based on the world of Doki Doki Literature Club. We are facing one of the most awaited MODS of this season, and without a doubt, it has been worth the wait because it is very enjoyable. Raise your hand fans of Monika and her friends! 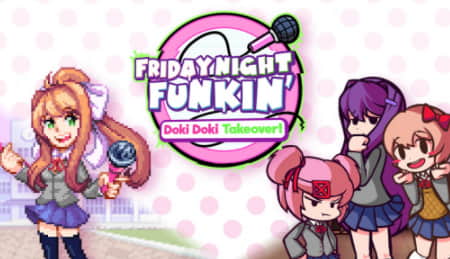 VS Monika + Doki Doki Takeover FNF week contains more than 15 new songs, including the remastered VS Monika songs, and new songs in which we will have a rap battle against three new characters: Sayori, Natsuki and Yuri.

These are songs with different catchy rhythms that emphasize the vocals of the characters. The difficulty varies between songs but we will have some really difficult ones, such as the song with Just Monika in which we will find arrows at full speed along with trick arrows that cannot be pressed. This secret song will be unlocked in the freeplay menu by beating the original weeks.

Graphically, FNF VS Monika + Doki Doki Takeover offers numerous contents for each song, from fully customized backgrounds to a detailed character design. In addition, the stages offer different details such as a custom color for the arrows. Not only does it offer us a full remaster for Monika’s week, but it also adds a week with a really well worked aesthetic.

This MOD has numerous cutscenes with dialogues that tell us about the lore of the characters between songs. Another of the interesting points to highlight are the skins of BF and GF, which we will find with the uniform of the school like the rest of the characters. The death animation for when we fail to overcome the songs is great. We will also find custom menu and home screen. We are facing a MOD which we were sure would offer great content, and it has, so now we just have to try it in one of our games.