Download Night Of The Funky Bot v2 FNF MOD – New release for Friday Night Funkin’ that includes a total of 3 new weeks for the game, being Lane the main character, and counting with several secondary characters that appear in weeks 2 and 3. It is a MOD full of details and interesting confrontations, especially since its v2 update, which has just arrived. 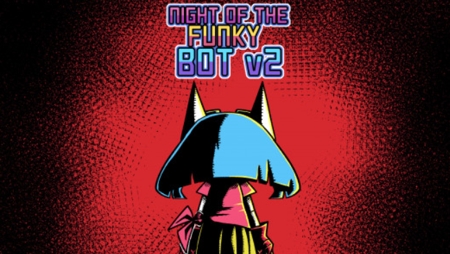 In FNF Night Of The Funky Bot v2 9 new songs are included, distributed throughout its 3 weeks. In addition, a couple of additional special showdowns can be accessed in the Freeplay menu. The quality of the music in this MOD is assured (and you probably already know this from having played v1). It is a MOD that offers all kinds of difficulty levels throughout all the weeks, but you could say that it offers some quite complicated songs.

In terms of graphics, Night Of The Funky Bot v2 is no slouch either, as it includes new skins, new backgrounds and new cinematics, all of which are of excellent quality. One of the details that I like most in this MOD are its special confrontations, among which stands out above all the song in which we will be GF instead of BF.

Overall, a super complete MOD that thanks to this new update enters the select club of the best MODs for FNF, without any doubt. It is true that it falls far short of the quality of some of the best, but it includes too many interesting additions to not take it into account.

Latest updates for Night Of The Funky Bot FNF MOD