FNF Friday Night Madness VS Hank High Effort is a new MOD for Friday Night Funkin’ that introduces the famous Hank, from Combat Madness, in a new full week for the game. For now it is in DEMO version, and offers us only one song, but we can already get an idea of details such as the quality of the main character’s sprites. 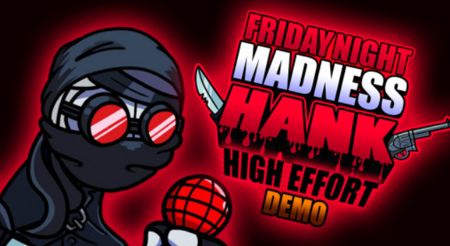 The first song we’ve been able to learn of VS Hank High Effort is not at all easy to beat, at least for a MOD’s first song. It has already been confirmed that VS Hank Full Week will feature a total of 4 new songs for FNF, of which not much is known yet.

Another piece of information we already have confirmed is that the Full Week version will include an additional week, called Hank+, which will include songs not used for the original week and Hank sprites from artists other than the official MOD developers. Many players have been waiting for a good Full Week VS Hank MOD for quite some time now, and it looks like this will be the MOD they’ve been looking for once it’s released.

PS: Do not confuse this MOD with Monday Night Madness, whose name is similar but is a completely different MOD.