Download VS TwinBots FNF MOD (BeatBot & Hackbot) – New release for Friday Night Funkin’ very worked and high quality, which includes two new characters, extensive animated cinematics, plus a fairly complete story. It’s certainly one of the most interesting MODs of all August, and clearly one of the most worked, so it’s very worthwhile compared to the average. 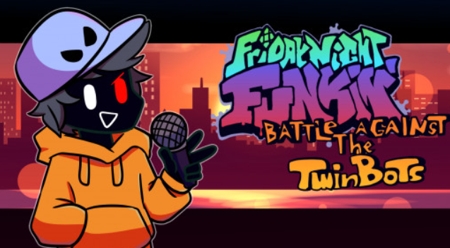 In FNF VS Twinbots 3 new songs are included in a new week for the game, which are also accompanied by two additional bonus songs. The first two songs are VS BeatBot, while in the last one we will face Hackbot, in what is the special confrontation of the week (and the most interesting song of the MOD). In addition, additional showdowns are available in the Freeplay MOD.

The new BeatBot and HackBot skins bring us two new well-designed characters, which are accompanied by their own quality vocals and animations. The new background, along with the new cinematics perfectly set the mood for the new week, which has its own parallel story to FNF.

It is clear that this is a great release, which has more work behind it than many others, which shows in the final quality of the MOD. Overall, one of the best of the month.