FNF VS Taki is a new MOD for Friday Night Funkin’ that includes a new Fan-made version of MFM, including Sarcente and Ruv replacing BF, who will have to face Taki throughout a new week. The new character, Taki, is another nun similar to Sarvente, although with her little peculiarities, such as the detail of carrying a chainsaw between her hands (I personally like her more than Sarvente). 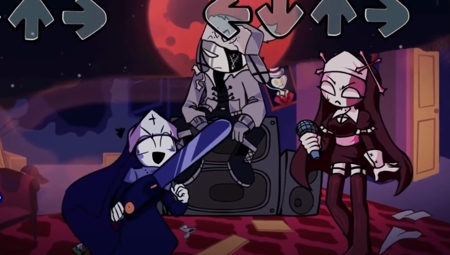 In Sarvente VS Taki you will be able to enjoy 3 new songs, each one containing a different confrontation, since in each one of them we will be each one of the three different characters, who will enter in replacement of BF. Although the most interesting inclusion of the MOD is Taki, the truth is that the new remixes offer fresh content and gameplay, which also maintains that little touch of MFM and the style of their songs.

Ruv & Sarvente VS Taki is a delight for fans of Mid-Fight Masses, as the content included maintains the quality of the original (or even improves it). The amount of small improvements and tweaks it adds (such as the splash notes, the small movements of the charts and their recolors, or the special effects, such as lightning, which are designed to perfection).

We have reached a point where it doesn’t matter if the MOD is original or fanmade, as long as it includes fun content and interesting gameplay, which is the case of FNF VS Taki.