Play Online FNF VS Monika DDLC (Rebooted Update) – MOD for Friday Night Funkin’ that allows us to face a new opponent, Monika, from Doki Doki Literature Club. Downloading this MOD will give you access to a new week within the game, containing a total of 3 songs, each with its own peculiarities. It is overall a MOD of extremely high quality that every FNF fan should try. 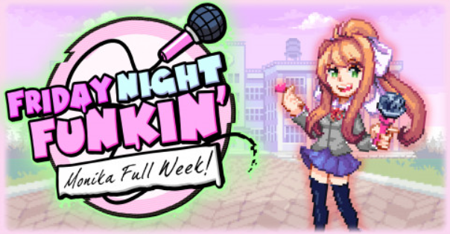 Actualization v1.0 – VS Monika (DDLC) has been updated to its FULL WEEK version, becoming the spectacular MOD we all knew it could be. The new update contains 2 new very peculiar songs, as in one we will have to face the forced duet of Monika with Senpai, and in the next we will face the giant version of Monika which is quite spectacular.

Update Rebooted v2.5 – The MOD has received a new rehaul, which adds a new second song and changes in the third one. As this new version removes the old versions, we have decided to keep the link to both, so everyone can choose the version they prefer.

The 3 songs included in the FULL WEEK version of the MOD are of medium/high difficulty, and have a quality that very few MODs reach. It is undoubtedly a very remarkable reversion of week 6 of the original game. Along with the new songs, we can also enjoy new cinematics and a development for the story of the MOD, which is quite interesting (especially for what happens between phase 2 and 3 of the MOD.

VS Monika enters with this update directly in the list of best MODs for Friday Night Funkin’ indisputably, since the previous version already belonged to the Hall Of Fame of the game. The thing is that the update offers us even better content than what was there in the beginning, putting this MOD at the height of the greatest in many aspects.

What does Monika (DDLC) FNF MOD include?