Friday Night Funkin’ VS MR Bean is a new MOD for FNF in which those who remember or know who is the famous MR Bean will be able to face with nostalgia this peculiar character. It is a MOD that stands out more for its character than for its overall quality, so it is only really recommended to those who really know who this character is. 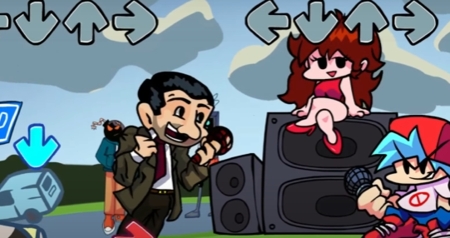 In FNF VS MR Bean 3 new songs are included, accompanied by new cinematics, which are not particularly orthodox in terms of difficulty, making the charts more complicated to beat depending on the particular section. The MOD also has a new special note (represented with a teddy bear), which we must not press (the typical thing we already find in many other MODs).

The best part of its aesthetic additions is undoubtedly the skin of MR Bean, since its new background is nothing special (again, it contains background characters as in many other MODs). Overall it is a MOD that is not bad, but there are many others with better quality in each of the elements that can be analyzed, which you can find in our section of FNF MODs.

Latest updates to VS MR Bean

This website uses cookies to improve your experience while you navigate through the website. Out of these, the cookies that are categorized as necessary are stored on your browser as they are essential for the working of basic functionalities of the website. We also use third-party cookies that help us analyze and understand how you use this website. These cookies will be stored in your browser only with your consent. You also have the option to opt-out of these cookies. But opting out of some of these cookies may affect your browsing experience.
Necessary Always Enabled
Necessary cookies are absolutely essential for the website to function properly. These cookies ensure basic functionalities and security features of the website, anonymously.
Functional
Functional cookies help to perform certain functionalities like sharing the content of the website on social media platforms, collect feedbacks, and other third-party features.
Performance
Performance cookies are used to understand and analyze the key performance indexes of the website which helps in delivering a better user experience for the visitors.
Analytics
Analytical cookies are used to understand how visitors interact with the website. These cookies help provide information on metrics the number of visitors, bounce rate, traffic source, etc.
Advertisement
Advertisement cookies are used to provide visitors with relevant ads and marketing campaigns. These cookies track visitors across websites and collect information to provide customized ads.
Others
Other uncategorized cookies are those that are being analyzed and have not been classified into a category as yet.
SAVE & ACCEPT