Download FNF VS Derpina – New MOD for Friday Night Funkin’ that includes a new character based on the Rage Comics that became quite fashionable a few years ago. This is a fairly simple MOD whose main attraction is its comic character, as Derpina will make us have a good time in a musical battle against BoyFriend. 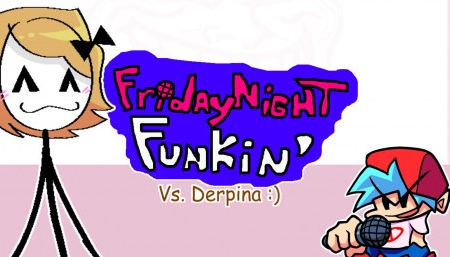 VS Derpina offers us 3 new songs with a common difficulty scheme, a first song with a gentle rhythm to warm up, a second song that increases the speed somewhat, and a third song with a higher level of difficulty. These songs sound good, as they include quite interesting rhythms, including the second song “Duh”, which features the music of Mickey Mouse.

Graphically, FNF VS Derpina stands out for its character creation, a funny character inspired by the Rage Comic. For this same reason, the MOD has dialogues and details full of humor. The background of this MOD is simply a blank room, so it is one hundred percent focused on the character. It is a MOD with a touch of humor that is not bad at all.