Friday Night Funkin’ Sudden Changes FNF MOD is a new unofficial version of the game that includes a new week in which we will be Sans and we will face Chara in 3 quite interesting confrontations. Although it is not the first MOD inspired by the universe of Undertale, the truth is that it offers details that have not offered others before, and it is worth a look. 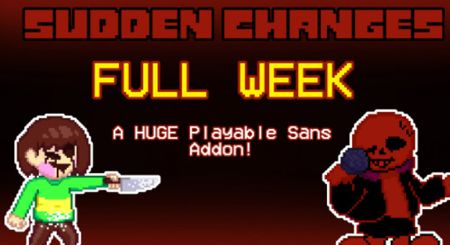 FNF Sudden Changes includes 3 epic style songs, which feature charts that get more complicated little by little. In terms of gameplay, the highlight is the third song, Bullet Hell, which has a fairly high difficulty and features different in-game mechanics (mostly the movement of the charts) that make it a unique confrontation in FNF.

In terms of aesthetics, Sudden Changes FNF MOD offers us a pixelated style similar to FNF week 6, which has not been seen in other MODs inspired by Undertale so far. Also, it should be remembered that in this MOD BF is replaced by Sans. The background of the week is quite worked, and the third confrontation features quite a few additional details that are also very well done.