Funkin Nights at Freddy’s is a MOD for Friday Night Funkin’ that includes different characters from Five Nights at Freddy’s inside FNF, introducing an original week inspired by FNAF for each of the weeks of the game. Downloading this MOD is totally recommended, but keep in mind that for now it is only a WIP (Work in Progress) and that the content it includes might have some bugs. 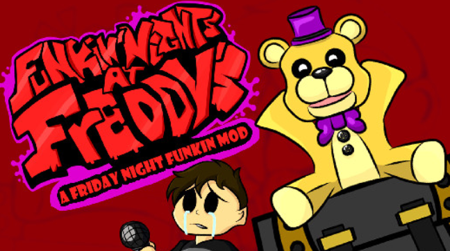 For now Funkin’ Nights at Freddy’s contains a new tutorial and 2 new complete new weeks for the game, in which a total of 4 new FNAF-inspired characters are added. The quality of the new character skins is simply spectacular, and makes this MOD the best crossover that has been created between FNF and FNAF to date. Each of the new weeks contains 3 new songs, and in the second week (called nights in the MOD), we will face several different opponents.

The attention to detail in this MOD is simply amazing, as it not only adds new weeks, but focuses on tweaking and customizing every little thing in the game. It is worth noting that this MOD in WIP version is better than many finished MODs, and that it is one of the most promising FNF WIPs to date. It should be remembered that this MOD aims to include a new week for each original week of the game, so there are still updates for a while.

New features of Funkin Nights at Freddy’s MOD for FNF