Download VS Perry The Platypus FNF MOD – New release for Friday Night Funkin’ in which we will face the iconic Perry, from the cartoon series Phineas and Ferb. It is a MOD in which it has managed to perfectly mimic the main character who stars in it, including a new skin for it, which is accompanied by a special vocal with his “real” voice. 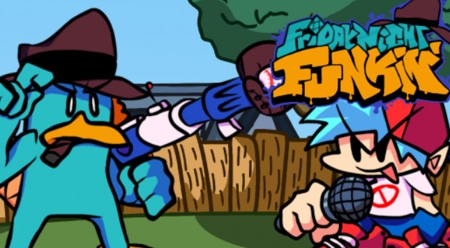 FNF VS Perry The Platypus came about as a half-joking release, but has ended up resulting in a MOD that isn’t bad at all. In the current version, which is only the DEMO, only one song is offered, which is also inspired by the Phineas and Ferb series. If the developers see that this version is liked among users, they will work on a Full Week version with more songs and other interesting additions.

For now the most remarkable thing is undoubtedly the new character and the song that accompanies him, since both are very well designed (charts included), which brings a very good base to the confrontation. I personally believe that a Full Week version will end up appearing, since the hardest part, which is to find an interesting starting point, they already have it.

Download VS Perry The Platypus for Friday Night Funkin’