VS Merchant is a MOD for Friday Night Funkin’ that includes two new opponents (VS Flexy and VS Merchant) in a complete new week within the game. Downloading and installing this MOD will not only give you access to new songs and skins, as it features some very interesting new features that enhance the gameplay experience. 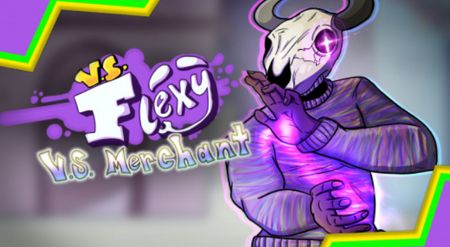 VS Flexy had in its initial version 3 new high difficulty songs in which we had to beat Flexy, and since the 2.0 update has a new song VS Merchant, whose difficulty is very high. If this was already a popular MOD for its difficulty, this new update puts it without a doubt among the most difficult MODs in the history of the game.

VS Flexy also has, since version 2.0, a new addition: the Golden Notes. These notes will appear throughout the songs and will give us more life than usual, to help us overcome the levels more easily if we hit them.

Although it is a MOD that stands out for its difficulty, it is not superfluous to say that the new skins and backgrounds included in it are very well made and set very well the story of the MOD. It is a MOD with a lot of personality that certainly deserves much more popularity than it currently has.

How to install VS Merchant on FNF

There is no need to install this MOD. You will just need to open the executable file that contains the MOD file folder.

Trailer and Review of VS Merchant FNF MOD (Video)