FNF VS Meat Boy is a new MOD for FNF that offers a new week of great quality, in which BF will face the main character of Super Meat Boy. It’s one of those MODs that stand out for its difficulty, but that’s not the only feature that makes it shine. 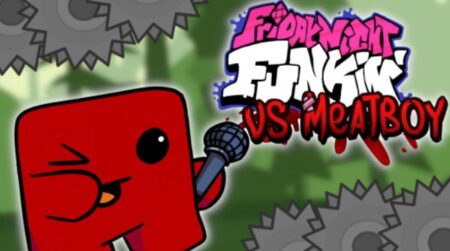 In the new Friday Night Funkin’ VS Meat Boy week you can play 4 new songs for the game, highlighting in all of them the difficulty and freneticism of their charts. It should be noted that they are not the typical impossible charts without sense, these charts are well designed and offer to the most experienced players an interesting challenge.

The artistic part, despite being simple, perfectly emulates the universe of Super Meat Boy. The new skin included is animated to perfection, and its new background is very similar to the style of the original game. Overall, simplicity is the hallmark of the MOD’s graphical inclusions, but it’s not a big deal given its focus on offering difficulty songs, and not so much on this aspect.

FNF VS Meat Boy undoubtedly offers a new week to add to the game’s most difficult must-plays. It’s been a while since we’ve received a high-difficulty MOD with such high quality.