VS Jeff The Killer x Slenderman x Pokemon is a MOD for Friday Night Funkin’ that consists of a large amount of content. It currently consists of three weeks for the game, with a total of 10 songs, and the developers have indicated that there is still content to be released. In the first week we will face Jeff The Killer, in the second we will have the opportunity to fight against Slenderman and finally, in the third week we will enjoy a fight against a Pokemon trainer. 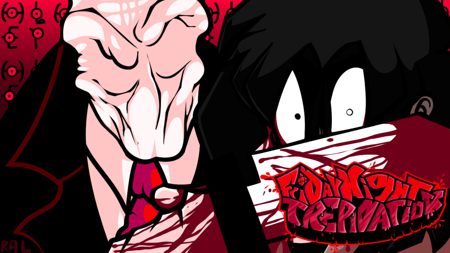 In the musical aspect of VS Jeff The Killer x Slenderman x Pokemon we can highlight that it is a MOD with a large number of songs. In this installment we can enjoy 10 confrontations full of intensity, with terrifying music, according to the aesthetics of the game. The rhythms are slow and the notes are sharp and strident, with which the developers of the MOD have managed to convey an aura of mystery and fear. It is worth mentioning that the difficulty of most of the songs is moderate, but the composition work is equally remarkable.

As for the graphic section, we find a MOD completely oriented to the aesthetics of the Spooky Season. In all clashes we can enjoy a terrifying atmosphere that is achieved with dark and gloomy backgrounds, as well as with mutilated and bloody characters.

The new update 1.5 of Friday Night Trepidation includes a total of 4 new weeks full of incredible songs and improved content, plus some extra songs and content. In the first week we face Jeff The Killer in a remastered version, in the second week we face Slenderman, in which we will find new songs and an improvement in the appearance of the character; in the third week we face Pokémon Lost Silver, also with a remaster of the contents and new songs, along with a two-dimensional adventure mode that includes terrifying contents; and in the fourth week, we can enjoy Dream man.

We are facing a MOD whose update does not stop here, as it plans to include more horror-themed content soon, with new characters in creepypasta version such as Herobrine from Minecraft. In VS Jeff The Killer x Slenderman x Pokemon the developers have achieved what they set out to do, get the best MOD of Halloween.