VS Noke FNF MOD is a new modified version of Friday Night Funkin’ in which we will be able to enjoy one of the best designed and most complete unofficial weeks of the game. Downloading this MOD will allow you to access new unreleased content that is not available in the original game. 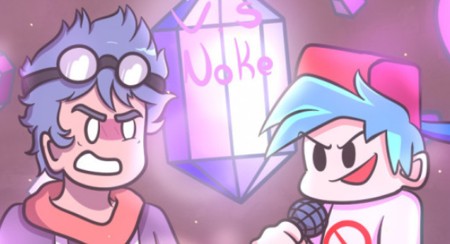 VS Noke is a MOD that, given its quality, is going to become one of the most popular MODs in the game (time to time). The MOD has 4 new songs, with new quality charts that bring us good quality Gameplay. In the third song Noke will lose his nerves and transform to his final form, to make things as difficult as possible. Every detail of this MOD is well taken care of, including the cinematics and the new backgrounds, as well as the new custom dialogues.

It is one of the most recommended MODs nowadays, as its quality is very high and it could perfectly be an official FNF week. In the coming days we are sure it will gain a lot of popularity.

Update v1.3 (26/04/2021) – The MOD has had several updates in which details have been improved in general, as well as including a new secret song inside the game, and many other secrets that you will have to discover on your own.

How to install VS Noke in FNF

This MOD can be played without installing its files. Just unzip the downloaded file and open the executable file containing the MOD files folder.

Trailer and Review of VS Noke FNF MOD (Video)