FNF VS NekoFreak Remaster (The Full Ass Freak MOD) is a new MOD for Friday Night Funkin’ that offers a total of 3 new weeks for the game, and is based on the famous VS NekoFreak, which became popular a few weeks ago, especially for the lore of its history. This remaster version greatly improves the original version of the MOD, adding two new additional weeks to the existing one and offering several improvements to the MOD.

FNF VS NekoFreak Remastered contains a total of 3 new characters for the game, all of them ex-girlfriends of BF before meeting GF. Each of the opponents has her own week, and each of the weeks features 3 original songs (the first of the weeks already existed in the original MOD, although details of it, such as the background, have been tweaked).

It should be noted that the two new opponents already existed as Bonus Songs in the original MOD, but in VS NekoFreak Remaster two new songs have been included for each one, so that a new week can be formed for each of them. 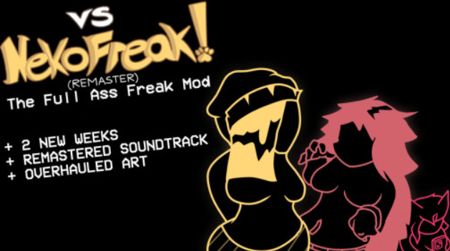 The truth is that VS NekoFreak Remaster looks like just another update of the original MOD, as they have managed to keep the same style offering new content. The large amount of content included (9 new songs), is enough excuse to keep an eye on this MOD.