Friday Night Funkin’ VS Castle Crashers REVIVED (Boss Rush) is a new MOD for FNF that contains a lot of quality content, with 7 new characters taken from Castle Crashers, which we will face in 7 different songs. This is not a MOD that is only reduced to add new clashes, as it has very interesting details, such as a new system of achievements or playable skins for BF, which we can unlock playing. 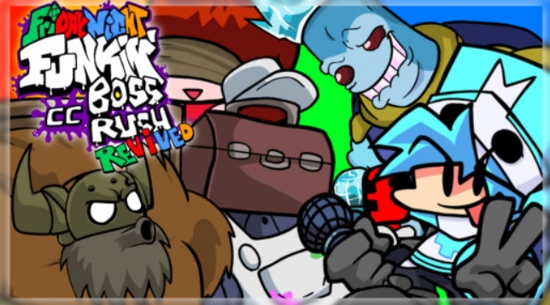 It should be emphasized that this MOD has no direct relation to the original Castle Crashers MOD first released by Banbuds. The new developers have continued the unfinished work of the original version, and have brought us one of the best MODs of the last weeks. The amount of content that we can find (a total of 7 songs), added to its quality, make FNF Castle Crashers REVIVED one of the most recommended releases.

In each of the songs of FNF Castle Crashers Boss Rush REVIVED we will face a different character. Each of the characters is perfectly designed, and they all come with their own custom stages, which also have a lot of quality. And that’s not all, since in the confrontation against Necromancer there is a new mechanic, which involves the use of the Space Bar, and in the confrontation against Evil Wizard the charts will move in a diabolical way all over the screen.

The bottom line is that this MOD is very worthwhile and you will not be disappointed if you download and try it. You don’t even need to know Castle Crashers, as it is a MOD that is worthwhile in itself, and does not require the fame of the characters to gain popularity.