Download FNF VS In The Galaxy 2.0 – New MOD for Friday Night Funkin’ that includes the new update of a well-known MOD that stands out especially for its charts, in which accelerated notes and moving arrows are included, all this along a journey through the galaxy with these two new and adorable pink-haired characters. 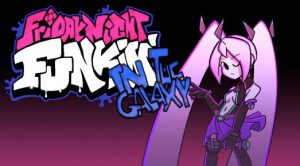 VS In The Galaxy 2.0 FNF has a new week that adds 3 new songs to the 3 songs that the MOD already had before. These are very pleasant songs to listen to, which include some sound effects and offer a fairly high difficulty mode, being the end of the songs the moment when the arrows move faster. We are facing a MOD that stands out especially for its arrows, which are changing places on the screen, and are constantly moving. In the last songs added with the new week the difficulty will be extreme due to the movements all over the screen and in different directions.

In terms of graphics, VS In The Galaxy 2.0 offers new backgrounds, in the first song we will see GF as a spectator and BF in a rap battle in the middle of a spaceship. In the second song we will see how a new character (Kalisa) appears, with a background in the forest and with more female spectators of the battle. In addition, it includes dialogues that tell us details about the history of these characters. In the penultimate song we will have a new stage design, in which the lights are off and everything (characters, arrows, etc) is highlighted in neon purple tones. This is a MOD with a fairly high quality, both for being one of the few that offer these features with the charts, as for the design of the characters and dialogues.

New features of VS In The Galaxy 2.0 FNF MOD

Download VS In The Galaxy 2.0 for Friday Night Funkin