Download FNF VS Wah – New MOD for Friday Night Funkin’ that includes a new character based on Wario, the antagonist of Super Mario. We are facing a horror-themed MOD in which we will find a strange and creepy confrontation between BF and a rather creepy and distorted version of the new character. 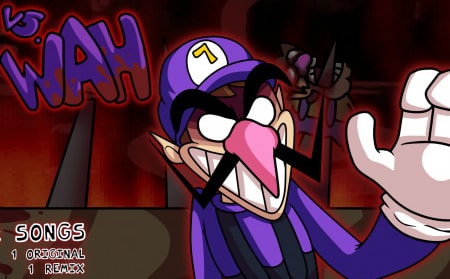 VS Wah FNF contains two new weeks in which two songs are included. In these songs we will be able to see that they are full of vowels saying the word “Wah” all the time, alluding to the MOD name and character. First we will have to access the original week’s song, and after beating it we will be able to unlock a following week that includes a new song. Both songs offer a high level of difficulty, with arrows at full speed and black arrows with special functionality, indicating that they cannot be pressed.

Graphically, FNF VS Wah offers a new custom background based on a creepy version of the Wario world. In the background we will see lava, the turtles of the video game stuck on a stake, and other elements of terror. In addition, Wario offers animations and facial expressions that are quite scary. One of the outstanding details of the MOD is the characterization of the character, which includes elements that change color. In the second song we will find a zombie and emaciated version of Wario, also with a high level of detail. This is an ideal MOD for those who enjoy creepy versions of famous characters, and for those looking for a musical challenge in FNF.