With FNF VS Rian The Stickman Unblocked you can play online from the browser a new release of FNF, which includes 8 new songs divided between a new week and different bonus songs. It is a MOD in which a main protagonist (Rian The Stickman) is added for the new week, and several secondary characters in the songs that can be accessed in the Freeplay menu.

You can play FNF VS Rian The Stickman Unblocked Online from FNFunkin. You can also download the MOD on your PC from the link. It is a MOD whose main peculiarity is its pixelated aesthetics, inspired by week 6 of the game, but which has numerous elements to highlight, such as its new songs and new characters. In addition, it is one of those MODs that includes a difficult challenge in the last of the songs of the week, which offers special versions of BF and Rian The Stickman. 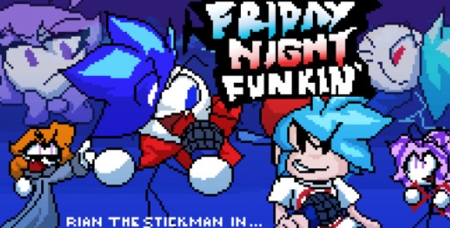