FNF VS Queen Sectonia is a new MOD for Friday Night Funkin’ that offers us a new and spectacular character to face throughout a new full week for the game. It is a MOD that, despite offering the same typical structure of other MODs, has several very remarkable elements that make it a very interesting release: its songs and its new character. 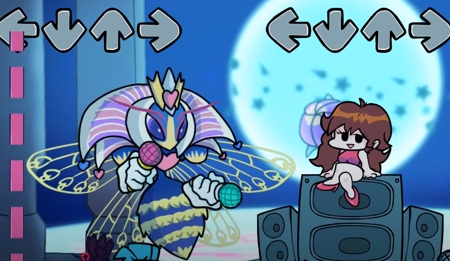 In Friday Night Funkin’ VS Queen Sectonia there are 3 new full-length songs that feature an “epic” style that reminds me of Zelda. It doesn’t feature particularly difficult charts, but they are very well designed and match perfectly with the original song, offering a very entertaining gameplay.

The artistic part of the MOD is especially peculiar, since its main character, Queen Sectonia, has a very creative and different design to what we usually see. Best of all, it features two totally different versions, between which it is quite difficult to choose.

The MOD has some more inclusions, like a couple of new backgrounds, new splash notes, or a peculiar new animation for GF in the third and last confrontation. Overall, a very interesting MOD that enters directly among my favorites, given the great creativity it contains.