Download FNF VS Jevil – New MOD for Friday Night Funkin’ that includes a new week that stands out both for its peculiar protagonist, Jevil, and for the quality of its music. Despite being a fairly simple MOD in several aspects, it offers quality in the most important aspect of the game, the gameplay. 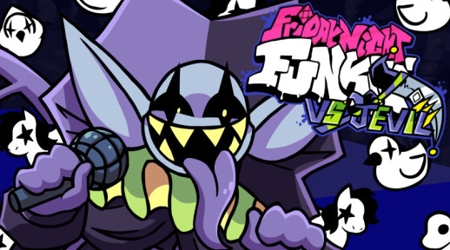 The new week of FNF VS Jevil includes 3 new songs for the game. The first one, which serves as an introduction, is considerably easier to beat than the next two. Overall, it features medium/high difficulty charts, although it by no means falls into the category of the most difficult MODs.

The MOD’s graphical additions are almost non-existent, beyond Jevil’s new skin, which is really well designed compared to the rest (the background for example). However, this doesn’t have to be a bad thing, as both the songs and the gameplay more than measure up.

Update – The new final update of VS Jevil includes a remaster of the three songs of the MOD, offering a renewed look for the character as well as for the backgrounds and menu, in addition, it adds several elements such as dialogues and scenes between songs that make the MOD look even better than before. It is possible that in the future some extra song will be added with the appearance of Circus, since for the moment it has been removed.