VS Cyrix is a new MOD for Friday Night Funkin’ that includes a new week in which you will face Cyrix, a music producer who has invited you to his studio to drop some bars together. Downloading this MOD will give you access to new unreleased FNF content, which cannot be found in the original version of the game. 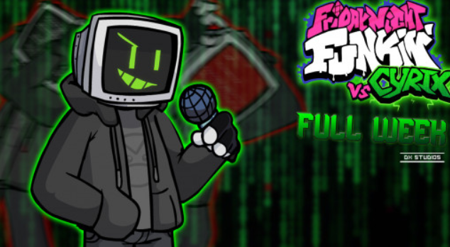 VS Cyrix is developed on Small Things Engine, and features 4 new original songs that come with quality charts. It should be noted that everything about the music in this MOD is done to perfection, and the charts are perfectly synchronized with the music. At the beginning the MOD is relatively simple, but it will get more complicated as the songs go by.

The graphic part of this MOD is also quite good, highlighting the final version of Cyrix in the fourth song, as well as the special background that accompanies the final confrontation of the MOD. It is undoubtedly a highly recommended MOD, and probably one of the best in recent days.