With VS Bob and Bosip Unblocked: The Expansion Update (2.0) you can play online from your browser to one of the best MODs of Friday Night Funkin’ in recent weeks, which has just been updated, receiving a lot of content that adds to the original week that already had in its first version Full Week. In total it is a MOD that contains more than 15 new songs of all kinds, in which above all premium quality (at least in the vast majority). 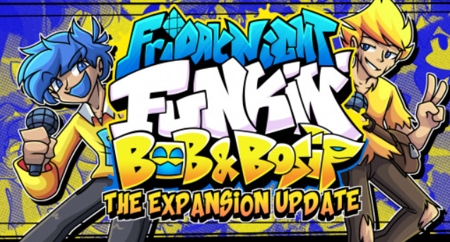 FNF VS Bob and Bosip Unblocked not only stands out for how well done all the songs and characters are. The cinematics included in this MOD are spectacular, as well as the new narrated dialogues that appear throughout the week. In addition, the story that accompanies the entire MOD, in which Bob and Bosip try to escape from BF by winning a battle, is also of an incredible level of quality.

One of the new features that I like the most in the new version 2.0 of the MOD are the new EX versions of the songs of the original week. In these reversions you will be able to access more complicated charts, and remixes of the songs very well done. Undoubtedly, one of the MODs that should try any fan of FNF, as it is literally a pleasure to play it because of how well done everything is.

You can play VS Bob and Bosip Unblocked (The Expansion Update) online from FNFunkin. You can also download the MOD to your PC from the following link (which is highly recommended, given all the quality content it adds since its v2 update).