Download FNF Too Late.EXE – New MOD for Friday Night Funkin’ that includes an EXE version of the brothers Mario and Luigi, as well as including the appearance of a surprise character in one of their songs. It is a MOD that stands out especially for its graphic design, which merges the pixel design with the Exe style for both characters and scenarios. 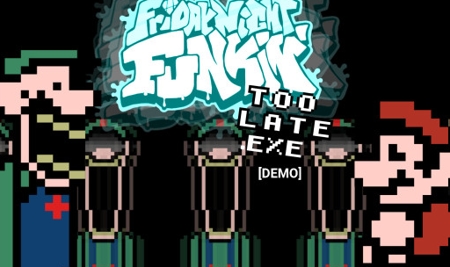 It is a MOD that includes a new original song in which we will have the participation of Mario and Luigi to take over the rap battle. In addition, its main week also includes a cover of the song “You Can’t Run” by Sonic.EXE. Finally, it includes a bonus song with a meme content that is loaded with humor. Graphically it has new backgrounds really well worked, which perfectly merge the two themes.