VS Olivia FNF MOD is a MOD for Friday Night Funkin’ inspired by Paper Mario (The Original King) that allows us to face a new rival in the game: Olivia. Downloading this MOD will give you access to a whole new week complete with new custom details unpublished in the original version of the game. 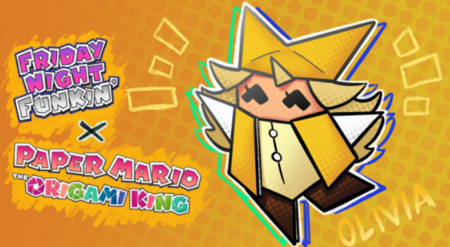 VS Olivia has 2 new songs, which are quite well designed (I mean the charts), except for some area of the second song in which some notes are not registered properly due to the engine used by the MOD. The graphical part of the MOD is excellent, and both the new skin and the new backgrounds are very remarkable. VS Olivia FNF MOD also comes with a new dialog system.

Overall, an interesting MOD that stands out for being well balanced between the design and the new songs included. We hope that future updates will add a new final song with even greater difficulty.

How to install Paper Mario (The Original King) on FNF

You will not have to install this MOD. That if, when you open the executable that contains the MOD file folder you will only be able to access the new week that includes the MOD, and you will not be able to play the original weeks.